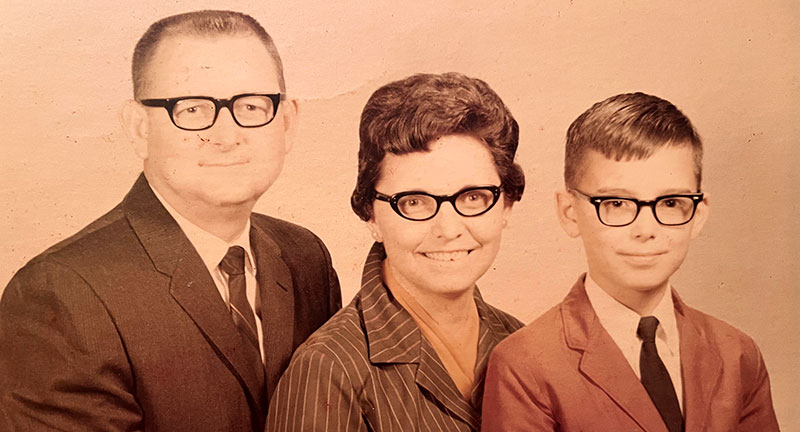 2021 marks the one hundredth anniversary of the births of Champ and Sara Ruffin. He was born on July 25, 1921, she on September 13. I want to honor them in this centennial year of their births.

Champ and Sara were many things. Champ was a Yatesville native, a World War II veteran, a textile mill worker, a Baptist deacon, and a men’s class Sunday School teacher—among many other things. Sara was a Barnesville native, a World War II widow of sorts (her fiancé was killed in France in the days following the Normandy invasion), a textile mill worker, and a children’s Sunday School teacher—among many other things.

Most importantly—from my perspective at least—among the other things Champ and Sara Ruffin were, they were my parents. I refer to myself as an only child, but technically I wasn’t one. They had another son two years after I was born, but he—his name is Stanley—lived only a few hours. So, for all intents and purposes, I am their only child. I am honored to hold that status and to carry on their legacy.

The truth is, though, that I don’t know the extent to which I actually live out their legacy. I certainly share some physical features with them. I look and talk like my father. I have lots of moles like my mother (I know—TMI. But facts are facts).

But I don’t think like they did. Sara had a deep faith, but she wasn’t a deep thinker. Champ thought some deep thoughts, but they were more conservative than the deep (and shallow) thoughts that I think. I suspect that my mother would be confused and my father bemused by the ways my mind works.

This raises the interesting question of how their continuing presence in my life might have affected my developing intellectual, ethical, and moral perspective. But they (involuntarily) checked out very early in my process, so there’s no way to know.

I do think that Champ and Sara left me a spiritual legacy that I perpetuate. My theology is more open and my ethics are more accepting than they could ever have imagined theirs (or anyone else’s) being, but that’s not what I’m talking about. I’m talking about having faith in God. Champ and Sara’s faith shined in many situations, but it shined especially in the ways they dealt with the cancer that afflicted her for years and that eventually took her life. It shined in their trust, in their hope, and in their perseverance. It shined in their refusal to succumb to bitterness, despair, or desperation. It shined in their consistent belief that God was with them, loved them, and would help them make it through.

I think—I hope and pray—that the kind of trust in God that Champ and Sara Ruffin possessed, practiced, and exhibited lives on in me.

If it does, that is enough.