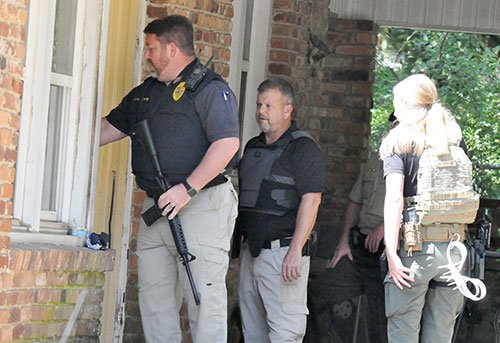 Heavily armed law enforcement officers prepare to clear a home on Jackson Street September 2 during the search for Zion Pate who allegedly fired multiple rounds into a car on First Street. An adult female at the scene said three children were in the car at the time. Pictured are (l-r) Lt. Ernie McWhorter, Capt. Al Moltrum and Sgt. Kathryn Knapp.

Barnesville police investigators are working the third drive-by shooting in just over a month in the city and there are concerns that violence is spreading here.

Police say Zion Pate opened fire on a car parked in a First Street driveway Sept. 2. An unidentified woman at the scene reported there were three children in the car at the time. “You’ve got to get him. He shot at my uncle just last month,” the woman was heard to tell officers.

Heavily armed police and sheriff’s deputies swarmed the area, clearing two homes on nearby Jackson Street without finding Pate. Warrants were issued Sept. 3 charging him with aggravated assault. Other charges are pending. No one was injured in the shooting.

At press time Friday, Pate was still at large. He is considered armed and dangerous. If you have knowledge of his whereabouts, call 911.

The string of shootings started July 21 when two alleged gang members from Columbus opened fire at Sammie’s on Mill Street. One man suffered minor injuries. Suspects have been identified in that case but not yet apprehended.

The second shooting occurred August 27 when three females, including a nine-year-old girl, were shot on Washington Street. All three have recovered.

The alleged shooter in that case, 40-year-old Travis Lael Mercer, was apprehended a short time later. Mercer was originally charged with three counts aggravated assault, four counts of reckless conduct, two counts first degree cruelty to children and possession of a firearm during the commission of a felony.

According to court documents, Mercer got into an argument with India Jackson about driving while drinking. He left only to return and open fire with a shotgun. India Jackson, Vicky Jackson and the nine-year-old were hit. All were taken to a Macon trauma center and later released.