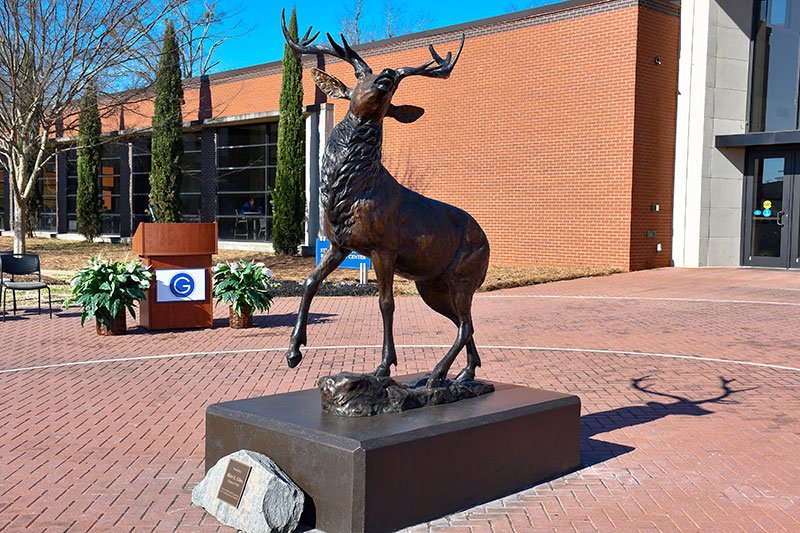 GSC Vice President of Advancement, External Relations and Marketing Montrese Adger Fuller opened the ceremony by thanking Angela Giles and her late husband, Alan Giles for leaving such “a wonderful legacy and addition to the Gordon State College campus that will be here for many years to come.”

Alan Giles was born in Dayton, Ohio in 1942 and graduated from Gordon Military College. He was a boarding school cadet and a member of the Alumni Class of 1960. “We call Gordon a home. His friends all came from here,” Angela Giles said. “They were always like brothers. Gordon meant so much to him. He excelled.”

Alan and Angela Giles have been loyal donors to GSC for many years. They had plans in place to provide the College with a bequest gift while completing their estate planning. This gift was received by GSC where the proposal to build a large stag statue as a legacy in the name of Alan Giles came to fruition.

“We’re here today to honor a good man. He was the best man that I ever knew,” Angela Giles said. “We’re here to honor him and this dedication of the stag. It’s gorgeous and takes your breath away.”

Dr. Kirk A. Nooks, GSC president was then introduced and gave a warm welcome as well as introduced Kierra Cooper Williams, GSC student government association president, where she explained the origin of GSC mascots that led to its current spirit mark, the stag.

In August of 2020, GSC revealed the new symbol of strength, pride and the Power of WE theme that would guide the institution’s progress for years to come. The stag, transformed into a spirit mark, is a nod to Gordon State’s rich history and represents the dedication to excellence in academics, inclusion and commitment of the mission.

“To me, this stag represents an arc that weaves through whether it’s Gordon Military College, Gordon College, Barnesville High School, or Gordon State College,” Nooks said. “It represents all of us, and what we’re doing here is demonstrating Highlanders Forward.”

The concept came from the historic Gordon Highlanders, who were a line infantry regiment of the British Army that existed for 113 years after two Scottish Regiments merged in 1881. They wore a crest with a stag and the motto “Bydand,” which means “Stand and Fight.”

“This occasion marks something special for us. When I came to Gordon State College, it was clear we needed a rallying area,” Nooks said. “This rallying point is where future and current students, as well as graduates can come back to. They have a spot to say this is where it started, this is where it ended, and this is what gives us energy and that rallying cry of Highlanders Forward.”

Founded in 1852, GSC is a member of the University System of Georgia. The college has a distinctive legacy of excellent scholarship and service. GSC offers 11 four-year degrees and 16 associate-level degrees, which includes multiple baccalaureate pathways for students. With an enrollment of over 3,000 students, GSC offers an intimate academic setting in state-of-the-art classrooms and laboratories. In this setting, students receive individualized attention that only a small college with dedicated faculty and staff can provide.