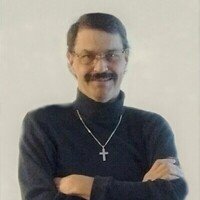 Mr. Michael “Mike” Leon Wilson, age 54, of Barnesville, passed away October 26, 2022, at Upson Regional Medical Center.  Mike grew up in the Griffin, Barnesville and Milledgeville areas, son of the late P. Leon Wilson and Elizabeth Jean Pippin Wilson.  He graduated from Milledgeville High School and worked as a truck driver for many years.  Mike loved all things Star Trek and collected lots of memorabilia.  He also enjoyed hunting and fishing
In addition to his parents, he was preceded in death by his half-brother, Roger Wilson, brother-in-law, Houston Taylor and sister-in-law, Alicia Wilson.
He is survived by his brothers: David Wilson and James Wilson (Joan Berry); half-sister: Barbara Wilson; several nieces and nephews.
A memorial service will be held on Sunday, October 30, at 3:00 p.m., in the chapel of Moody-Daniel Funeral Home,
Friends may visit the family on Sunday, from 2:00 p.m. to 3:00 p.m., at the funeral home.
Moody-Daniel Funeral Home is assisting the family with arrangements.