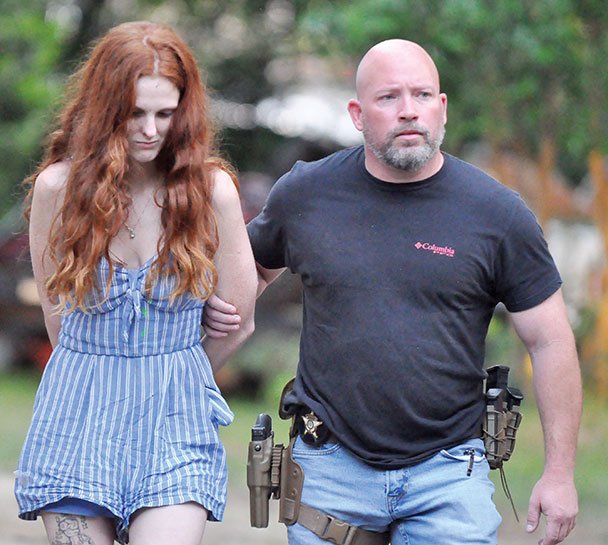 A dawn raid on a home at 150 Holmes St. in Barnesville Aug. 13 led to two arrests and a male toddler being placed into protective custody. The home had been under surveillance for several months.Just before the warrant service team arrived, a male subject left the home in a Mustang and went to a home on Stafford Avenue but was quickly located and arrested.Jacob Daniel Standridge, 28, was found in the home with large amount of meth stuffed down into the chair in which he was sitting, according to sheriff Brad White. Standridge was charged with sale of meth, distribution of controlled substances within 1,000 feet of a school and possession of meth with intent to distribute. The Mustang was seized. Standridge remains in the Lamar jail. He has been jailed here five previous times since Aug. 2017 on traffic violations and charges including multiple counts of possession of drug related objects, possession of marijuana and possession of meth.Arrested in the Holmes Street residence was 21-year-old Haley Marie McNaughton who was charged with possession of a Schedule II controlled substance. She was also charged with first degree cruelty to children for depriving the child of sustenance, according to arrest records.McNaughton has since been released on a $15,000 bond. Like Standridge, she is no stranger to the Lamar jail with four other arrests since December 2018 on charges including possession of marijuana, probation violation, possession of meth and possession of drug related objects.