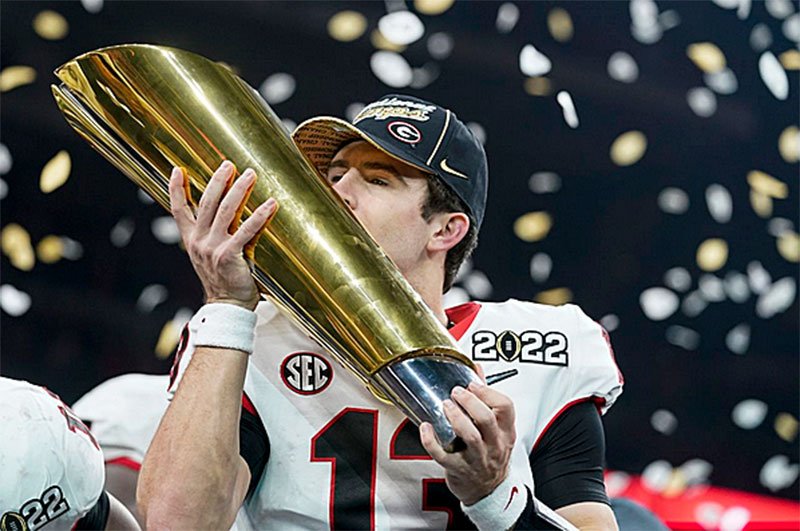 When last we discussed Georgia football in this space, Alabama had routed the Dawgs in the SEC Championship and, I admit, I thought we were toast. I feared Michigan would roll past a down and disappointed Dawgs squad in the CFP semifinal at the Orange Bowl.

I needn’t have worried. Georgia caught the Wolverines nose first in a leg-hold trap, slowly skinned them alive and finally, mercifully eviscerated them in a 34-11 win that was over at halftime.

The Michigan offensive line, supposedly the nation’s best, looked like a Walmart shower curtain trying to hold back the onrushing Dawgs.

A matchup with the Crimson Tide loomed in the title game. There was optimism mixed with dread in that Bama has owned us lately, with heartbreaking, last-minute win after win after win.

The championship game in Indy began horribly for Stetson Bennett who looked like a deer in the headlights in the pocket. An early apparent scoop and score for the Dawgs was called back, further taking the wind out of the UGA sails. We had more penalties than first downs.

The Bama offense, on the other hand, was on point but the Dawgs managed to hold them to three field goals while scrambling for two themselves and it was 9-6 at the half.

Bama opened the second half with a long drive, stalled and Jalen Carter blocked a field goal. The tide began to turn at that point. James Cook had a long run, Georgia scored and it was 13-9. Bama got a field goal and it was 13-12.

Then there was another controversial call that went against the Dawgs. Bama started a drive in the UGA red zone and scored making it 18-13. A two-point try failed and Georgia was down by five.

Nick Saban and the Tide didn’t know it but they were done.

Bennett and three freshmen went to work. On a free play due to an offsides call, Bennett threw a long scoring pass to Adonai Mitchell. UGA misfired on a two-point attempt and it was 19-18.

On the next possession, the Dawgs drove down the field, Bennett hit Brock Bowers for a TD and it was 26-18.

Then came the pick six by Kelee Ringo that put an exclamation point on the 33-18 win. Bennett burst into tears. I teared up, too.

At halftime, Kirby Smart had asked his team, “Do you want to be legendary?”. They did! Bennett, Bowers, Ringo and Mitchell will never have to buy a drink or a meal in this state again.

With Georgia up by eight, I told my friends that I just couldn’t rest easy until we had driven the stake through Saban’s heart. Ringo did that and he did it emphatically.

For long-suffering Georgia fans like me, it is like a great weight has been lifted. I’m glad I was in New Orleans in 1980 and even more pleased that our youngest was at Lucas Oil Stadium for this anointing of a new generation of champion Dawgs.

It was a great moment and, as I watched the confetti blowing around the field during the postgame celebration, I teared up again. I thought of some great Dawg fans who passed on while awaiting the drought-breaker: Louise Jackson, Bobby Butler, Emmett Coleman, Red Haywood; college friends Garry West, John McGowan, Bernard Wind.; the list goes on and on.

Then it dawned on me they had the best seats in the house and Larry Munson there to call the game for them. Epic!

Has a nice ring to it, doesn’t it?