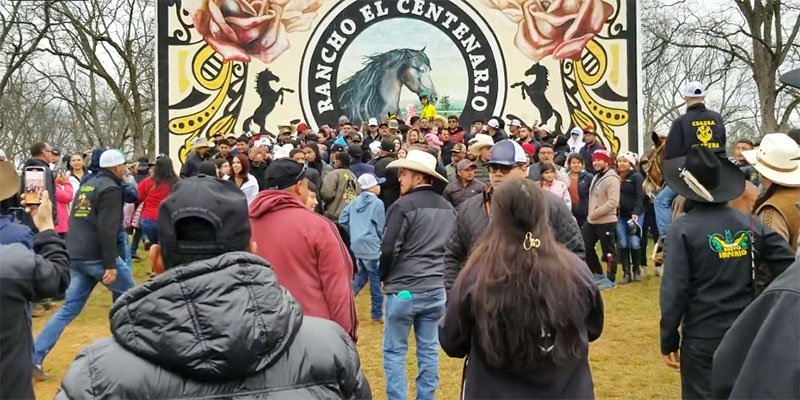 Local officials are reacting to a story from The Washington Post and accompanying videos shot surreptitiously by PETA representatives regarding quarter horse racing at Rancho El Centenario on High Falls Park Road here that came out late Friday.

The extensive report outlines the alleged drugging of horses with cocaine and methamphetamine and the use of shock devices to get them to run faster. It also details injuries to jockeys, one of whom died, and horses, one of which broke a leg and was shot and dragged off with a tractor.

Law enforcement sources say the story likely was generated by a rookie USDA investigator sent to the track who bungled the attempt to build a federal case, had no authority to pursue a state case and then leaked the information to PETA which then went to the Post.

District attorney Jonathan Adams reiterated his comments which were included in the story. He noted the Department of Justice will not confirm or deny any pending investigations of the so-called bush track run by Brutz English.

Commission chairman Charles Glass said he was not surprised by the allegations in the story. “I do not condone anything that goes on out there but I have to balance my personal dislike with the legal limits of what we can do. I have always said the state agritourism law is too broad in what is allowed and he is taking full advantage of that,” Glass said.

Glass said English uses Lamar deputies for security which benefits the deputies but it is hard to quantify costs from the track absorbed by taxpayers. “Years ago, I got after Brutz about litter on the roads after an event. Since then he has picked up litter on Monday mornings with his crew and it seems to have stopped that problem,” he said.

The chairman said there is a benefit for English to operate the track but none for the county. He added, however, that no benefit to the county is not reason enough to shut the track down.

“Agritourism is defined by the state to be anything that brings people to the farm for education or entertainment. That is why he claims to be operating a agritourism venue. With his legal background, any action taken against him is going to be fought and delayed in the courts. He has a right to do that. He will use every possible legal maneuver to fight legal action against him and it will be costly for our citizens,” Glass concluded.

The county may have an ally in the legal fight in attorney Jonathan Sexton lives near the track and has long been active in citizens groups in the area. “I am debating getting a group of citizens to file suit for it being a public nuisance. I will be looking into the law on the issue,” Sexton said.

Sheriff Brad White confirmed that his investigators have worked with various federal agencies over the past six years in conducting investigations into activities at the track.

“Those investigations stemmed from drug sales to injecting horses with illegal substances, to gambling at the track. We are still working with our federal partners. I have been in discussions with the district attorney about what evidence we can use from the PETA investigations for prosecution. I cannot comment further about ongoing investigations but I would love to see our state legislature ban horse racing in Georgia,” the sheriff concluded.

Commissioner Bob Heiney reported he has long heard rumors of questionable activities at the track but had seen no proof until the investigative report broke.

“I don’t see any revenue or benefit to the county generated by this operation but I don’t think it places any substantial burden on the taxpayers,” Heiney said. He cited English’s rights as a property owner and noted, if laws were broken, he deserves his day in court.

“In a civilized society with rule of law, there are numerous processes to ensure justice. We must not jump to conclusions based off a news media story. Aside from The Herald Gazette, which I trust for news content, media like The Washington Post have been caught numerous times fabricating content and outright lying. The county and the people who live here have a right to the truth. Let’s get to the truth and base future decisions on the truth,” Heiney concluded.

The investigative report and the accompanying video and still photos are a black eye for the community. One retired banker noted, “Other communities in our area are making headlines for attracting Rivian and Amazon and we get a Mexican horse track.”

Kathy Oxford, executive director of the Industrial Development Authority, agreed with that sentiment.

“As an advocate for animals, any abuse for sport, whether it be dog fighting, cock fighting or this type horse racing makes me sick to think about. If there are legal loopholes, which clearly there are, the elected leadership and law enforcement of this county and the state have a job to do. I’d like for us to be known as a destination for quality jobs, a place to live with amazingly giving, caring people, schools that each respect for humans and animals and, most of all, the leadership to stay the course,” Oxford concluded.

This letter is in response to your email of yesterday. I have heard rumors of things going on at the facility (Rancho El Centenario) but I have never been inside the facility and have seen no factual evidence. If the allegations in the report (The Washington Post) are true, I am absolutely appalled and sickened! I have personally had to make numerous calls to Brutz English about the loud music and he has immediately handled it. The personal property is on the tax digest so that contributes to the county revenue. Regarding first responders, that service is available to everyone. Because that is a public road used by everyone, I am not sure how you would measure road repair costs to that specific location.

If the allegations in the report are proven true, it is my opinion it is a violation of the agri-tourism zoning and the board should move to immediately remove that zoning through process of law.

However, it is law enforcement’s responsibility to investigate and prove any alleged criminal activity and respond accordingly. The Washington Post article is not a legal investigation and should not be treated as such.

The allegations contained in the recent Washington Post article and PETA social media video concerning my business are untrue and were characterized to mislead and inflame public opinion. The facts are, I hold, and have held, a valid business license and a Georgia Department of Agriculture Stable license for ten years. My facilities are inspected by the State several times each year. I have had constant interaction with various members of the Lamar County Board of Commissioners over the years, and many of them have been out to my place of business from time to time. According to both the Lamar County Sheriff and the Towaliga Circuit District Attorney, my business been subject to investigation by their offices as well as the United States Department of Agriculture for at least eighteen months. My business has to be the most investigated, most closely scrutinized business in the history of Lamar County. Despite all of the scrutiny and investigations, by all of the myriad officials and agencies, no one connected to my business has ever been charged with a single criminal offense.

PETA and the Washington Post are well known for aggressively pursuing their own political agendas. Both have recently been attacking the horse racing industry nation-wide. which is clearly reflected in their reporting and social media postings over the past several years. They cobbled together half-truths and flashes of gore to inflame and incite people. Their report and postings are neither accurate, nor reflective of my business or any of the activities on my property. If there was there was any truth to any of it, one or more of the many investigating officials or agencies would have certainly taken some official action.

Horse racing is completely legal in Georgia. However, it is not regulated by the State. Contrary to what the Washington Post and PETA would have you believe. I do have rules (both posted and enforced) at my place of business. Unfortunately, on rare occasion accidents do happen. And sadly, some people will always try to cheat at sport to get an advantage. We do police these things and try to stop them. I have been in the large animal business most of my life. My father and grandfather were cattlemen on this same property. I grew up on a farm with cattle. I love animals and don’t condone the abuse or neglect of any animal. When we find a safety issue, we fix it. When we catch a bad actor, we show him or her the door.

PETA and the Washington Post have an agenda, and they want you to buy into what they are selling. Their work was intentionally designed to repulse and enrage the reader/viewer, and to get people angry before they could think about, or even question, what was being fed to them. They have an agenda, and they fed you what they wanted to get the reaction they wanted. Please understand, what was contained in their work was not accurate or correct, and it certainly was not representative of my business or it’s practices.

The investigative report is extensive and far too long for reprinting here. It can be found at https://www.washingtonpost.com/sports/2022/08/05/bush-track-horse-racing-georgia/.