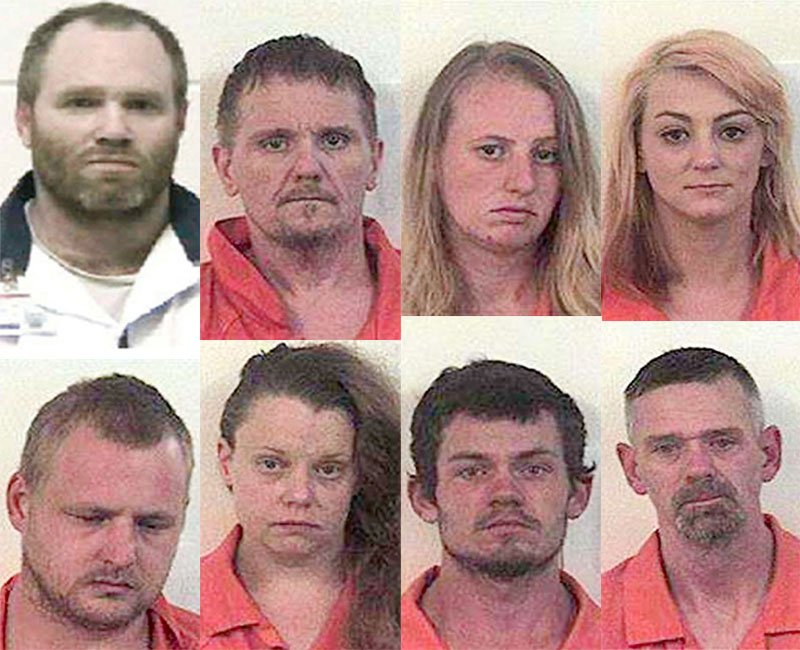 A drug raid on a home at 132 Perkins Rd. here April 12 resulted in the suicide of a 53-year-old High Falls man whom deputies did not know was at the residence upon their arrival.

According to sheriff Brad White, the warrant service team arrived at the home, which is owned by Nancy McElreath, to serve a search warrant. A number of people ran from the home. Seven were arrested and a quantity of meth was seized along with firearms and drug paraphernalia. One female was apprehended as she ran toward a truck at the rear of the home.

Deputies heard an explosion that they originally thought was a flash bang being deployed. When it became apparent no flash bang had been used, they returned to the truck to find Joe Larry Brewer, Jr. inside with a self-inflicted gunshot wound to the head. Although a heartbeat was initially detected, he died at the scene.

Brewer was on federal probation and had cut off his ankle monitor two days earlier. He was the subject of federal warrants. “The word on the street was he had gone to the house to kill the guy who snitched on him and then he was going to kill himself rather than go back to prison,” sheriff White said.

The Georgia Bureau of Investigation worked the scene at the request of sheriff White. “I called them in due to the fact he shot himself while we were executing the search warrant. The house had multiple security cameras and one was pointed right at the truck. The GBI has that DVR as evidence,” the sheriff said.

Ralph Shane McElreath, 48, lived at the home. He was arrested and charged with possession of a Schedule II controlled substance and trafficking in meth. He was denied bond at a preliminary hearing April 14 and remains in jail.

Jessica Suzanne Glover, 29, of 426 E St. in Thomaston was charged with possession of meth and possession of a Schedule I controlled substance. Her bond was set at $16,000 by chief magistrate Paul Kunst.

Briana Khrystene Norton, 33, of 125 Johnson Rd. in Barnesville was charged with possession of meth. Her bond was set at $8,000.

James Grady McDaniel, 43, of 227 Warner Rd. in Barnesville was charged with possession of meth and possession of a firearm by a first offender probationer. His bond was set at $30,000.

Jeremy Ryan Knight, 26, of 161 Shawnee Trail in Milner was charged with possession of meth and possession of an illegal sawed off shotgun. His bond was set at $13,000.

Coroner Clay Tillery reported Brewer’s body was not sent to the crime lab for autopsy. “My information is the deceased was living in a camper behind the residence where the warrant was served,” Tillery concluded.

As of noon on April 19: Dye, McDaniel, McElreath and Norton remained in jail.