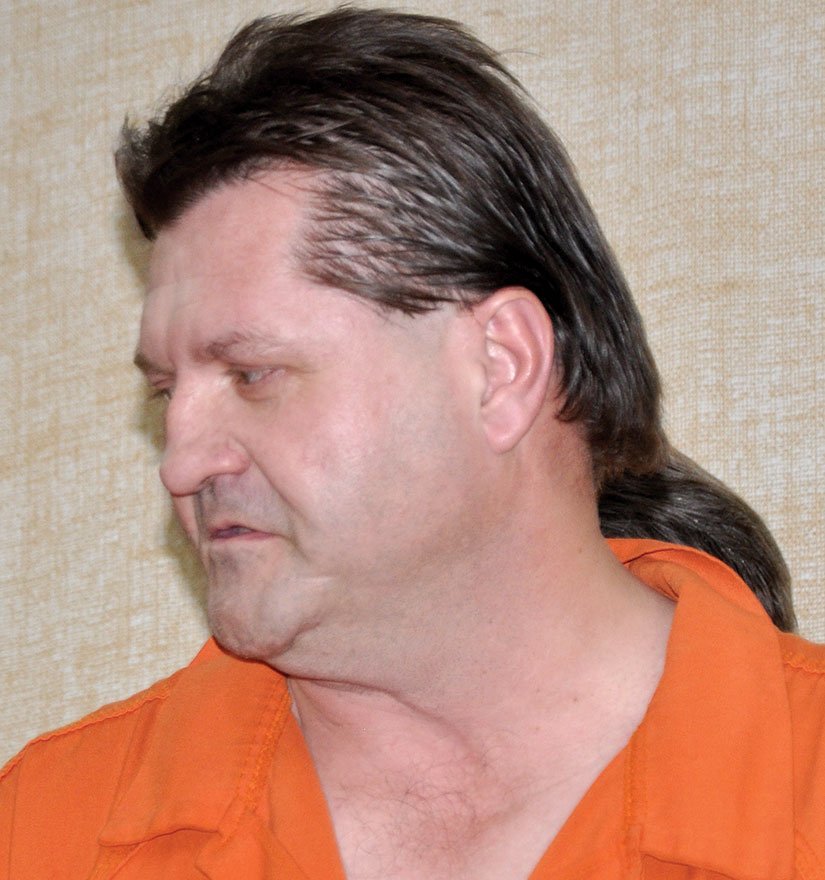 Travis Ball is shown in Lamar magistrate court in 2017. He was convicted of arson in Upson County and was the prime suspect in an incident in which white powder was mailed to various locations, including The Herald Gazette office. (File photo: Walter Geiger)

A Georgia man was sentenced to prison for threatening to kill the President of the United States and blow up the White House, following an investigation that included multiple death threats issued against local judges, law enforcement and a threat letter containing a white powdery substance sent to the U.S. Courthouse in Macon.

Travis Ball, 56, of Barnesville, Georgia, was sentenced to serve 33 months in prison to be followed by three years of supervised release and ordered to pay a $7,500 fine by Chief U.S. District Judge Marc Treadwell on Nov. 30 after he previously pleaded guilty to threats against the President. There is no parole in the federal system.

“Sending death threats and purported anthrax is not protected speech — it is a crime,” said U.S. Attorney Peter D. Leary. “I applaud the investigative work by our federal and local law enforcement partners to secure justice in this case.”

“The sentencing in federal court of Mr. Ball is commensurate with the wasted resources and concern generated by his hate-filled hoax anthrax letter campaign,” said Keri Farley, Special Agent in Charge of FBI Atlanta. “While Mr. Ball’s criminal conduct clearly illustrates his lack of concern and compassion for others, it also illustrates an unwillingness to be rehabilitated.”

“The U.S. Secret Service works closely with law enforcement and criminal justice partners at every level to investigate threats against our protectees,” said U.S. Secret Service Resident Agent in Charge Clint Bush with the Albany, Georgia, Resident Office. “Our zero-fail mission requires a tireless dedication from thousands of agents and investigators across the country to ensure the nation’s highest elected officials are protected from criminals like Travis Ball. Those who perpetrate these crimes must be held accountable for their actions, and we are thankful for the strong partnership we enjoy with the Department of Justice.”

According to court documents and other evidence, Ball sent a series of letters using another individual’s name as an alias to a variety of local and county government offices and officials, including judges with the Superior Court of Jones County, Georgia, and the Jones County Sheriff’s Office in March 2021. On March 23, 2021, a threat letter signed with the same name and the same return address was received at the U.S. District Courthouse for the Middle District of Georgia, which contained a white powdery substance. At that point, federal law enforcement agencies, including FBI, began investigating the source of the letters and identified Ball as the suspected author.

On March 23, 2021, a warrant was executed at Ball’s residence and agents noted that Ball was residing in the front living room where he slept on a cot and spent most of his time on a laptop computer and writing letters. One of the items seized was a stack of white leaflet notebook paper that matched the threat letters found on the mantle above his cot. The top page had the impression of a letter. Investigators lightly shaded the page with a pencil and discovered that it contained an explicit threat against the President of the United States, Joseph R. Biden, dated on March 8, 2021, which stated, “HATE YOU JOE BIDEN AND AM GOING TO KILL YOU AND YOUR FAMILY AND EVERYONE IN THE WHITEHOUSE! I’M A PSYCHO KILLER AND AM GOING TO BLOWUP THE WHITEHOUSE AND KILL EVERYONE IN IT! IM SERIOUS AND NOT KIDDING! LOCK ME UP OR ALL OF YOU WILL DIE! HAVE SOME ANTHRAX YOU BASTARDS!” The White House Mail Sorting Facility received the letter on March 30, 2021, which was turned over to U.S. Secret Service.

Ball was convicted of felony hoax threats in the Northern District of Georgia in June 2017 after he sent letters to the State Bar of Georgia and to Atlanta Newspapers in 2016 that contained a white powdery substance with threats to “kill all of you” and “have some anthrax.” Ball was sentenced to serve 24 months in prison to be followed by three years of supervised release on June 23, 2017.

The case was investigated by the FBI, the U.S. Secret Service and the Jones County Sheriff’s Office.

Published in Crime and Arrests, News, Slider and Top Stories