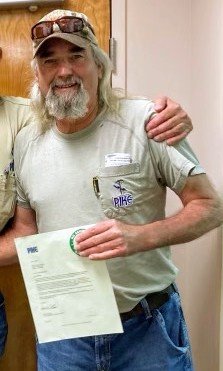 William Perry Marshall, Bill to those who knew and loved him, passed away unexpectedly on Monday, October 24, 2022, age 68 years old, at Piedmont Hospital in Atlanta. Bill was surrounded by the love of his family as he transitioned from this world to the next.
Bill was born on December 19, 1953 in Savannah, Georgia, the son of James Clay and Janelle Pruitt Marshall. He joined a brother, James Steven, followed by a sister, Janet Reneé. Bill graduated from high school in Barnesville, Georgia in 1970. He ultimately went on to establish a career as a lead lineman and crew supervisor for Pike Electric, Mt. Airey, North Carolina. At the time of Bill’s death, he was working QEP overseeing safety training and inspections. Bill was awarded his 36 year recognition in September 2022.
Bill married his wife of 46 years, Deborah Waters, in August of 1976. Bill and Debbie traveled widely and often during the years, even locating to Alaska for a period before returning home to Georgia.
Remaining to cherish Bill’s memory are his wife, Debbie Marshall; son Jody (April) Marshall; two grandchildren and three great-grandchildren; sister-in-law, Marilyn Price and mother-in-law Inez Waters. He also had many nieces and nephews.
Bill is also survived by his sweet mother Janelle (Nanny) Marshall. The two of them enjoyed Sunday morning breakfasts together. He also leaves behind a sister, Renee´ (Joel) Gill, who loved him very much; a niece, Melanie (Brandon) Vaughn; a nephew Andrew (Katy) Reeves and many aunts, uncles, nieces, nephews and cousins.
Bill had many special friends from his job at Pike. “Bill was a devoted son, husband, brother, friend and mentor to a lot of people. He will be truly missed. He made a lot of boys into men.”
Bill also had three special girls who love and miss him dearly, Shelly, Carra and Lily, his sweet English retrievers who loved their daddy and welcomed him home every evening.
A celebration of life for Bill will be held on Saturday, November 26, 2022 at 12 p.m. Please join the family as we celebrate Bill with food and memories. Dress is casual.
Contact info and celebration: Joel and Renee´ Marshall Gill, 1003 Drew Allen Rd., Williamson, GA 30292, 770-468-5300.